With a long and intriguing history, the Hope Diamond is one of the most famous gems in the world. Once passed between elite families and royalty, today the stone is displayed in the Smithsonian Museum in Washington D.C. where it continues to delight mystery lovers and diamond aficionados alike.

History of the Hope Diamond

The Hope Diamond is believed to have been mined in India and became part of the crown jewels of France in 1668. In 1673 the original 112 carat stone was cut down to just over 67 carats, and became known as the "French Blue" for its intense color with a hint of gray. The stone was reset several times for different purposes, and in 1791 it was turned over to the new parliamentary government of France after the deposed monarchs, Louis XVI and Marie Antoinette, attempted to flee the country. During the French Revolution's raids and looting in 1792, the French Blue disappeared.

It is believed that the stone began a tumultuous journey at that point that included reshaping and cutting. It may have been acquired by King George IV of England, and afterwards passed to Henry Philip Hope, for whom the modern stone would be named. The diamond passed through the Hope family after several deaths and was eventually used to pay off excessive debts. After several similar transactions, the gem was sold to Pierre Cartier in 1909, who in turn sold it to Mrs. Evalyn Walsh McLean in 1911, originally as part of an elaborate headpiece but eventually remounted as today's familiar pendant.

Mrs. McLean is perhaps the most well-known owner of the famous jewel, and her life was marked by numerous tragedies. Those events, along with the stone's long association with debts and misfortune, gradually founded the idea of the diamond's curse, though Mrs. McLean herself discounted such superstition.

In 1947, Mrs. McLean died, and two years later Harry Winston purchased her jewelry collection, including the Hope Diamond. He displayed the stone at numerous exhibits and charity events for the next decade, and on November 10, 1958, donated the gem to the Smithsonian Institution. Since that date, the diamond has only left the museum four times - to be exhibited at the Louvre in Paris (given the gem's French origins), to appear at a show in Johannesburg, South Africa, to reappear in the Harry Winston Collection as part of a fiftieth anniversary celebration in 1984, and to be returned to Harry Winston, Inc. in New York in 1996 for minor restoration and cleaning. 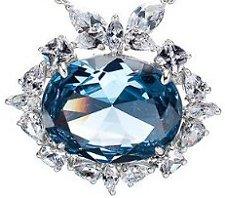 The Hope Diamond is a fancy dark blue diamond, with its rich color coming from the presence of trace amounts of boron. The official weight is 45.52 carats, and the shape is a cushion antique cut with a faceted girdle and extra facets on the pavilion for additional sparkle and brilliance. The clarity is rated VS1 with minor whitish graining present under magnification.The diamond is set in a pendant, ringed by sixteen white pear and cushion cut diamonds. The necklace chain contains an additional forty-five white diamonds as well as a specialized clasp to attach other chains or stones, something Mrs. McLean did on occasion with the other gems in her collection.

The diamond's value is much disputed. Because of the antique cut (not as brilliant as modern stones) and minor flaws, some sources quote a conservative appraisal of $200,000. Because of the stone's rich history and mystique, however, the actual value may be upwards of a quarter of a billion dollars. Needless to say, the stone itself is not available for sale at any price.

The Hope Diamond is one of the most visited objects in all of the Smithsonian museums. It is located in the Natural History Museum in the Harry Winston Room in the Hall of Geology, Gems and Minerals. The display areas were renovated in 1998, and today the diamond is vibrantly exhibited in a specially designed case with customized lighting and rotation to provide the best possible views for every curious visitor. Because of the inestimable value of the gems in the display, the room itself has various security features to insure the safety of the collection. Fans of the stone can purchase replicas of various sizes in the museum's gift shop.

The Smithsonian's hours and dates of operation may vary depending on exhibit construction, renovations, holidays, and events. For detailed information about how to see the Hope Diamond, visit the official website.

0
Comments
© 2006-2020 LoveToKnow, Corp., except where otherwise noted. All Rights Reserved.
The Hope Diamond