There is no more immediately recognizable romantic gesture than when a man proposes marriage down on one bent knee. This custom has been around for centuries and remains popular today.

History Behind Proposing on a Bended Knee

There is no clear historical origin of the idea of proposing on a bent knee, but the gesture bears striking resemblance to many other ceremonial situations, including:

Regardless of the origin, the idea of asking for a loved one's hand in marriage while partially kneeling is a highly symbolic gesture embodying the very essence of committing one's life to another. The ideas of goodwill, honor, and trust in that one person is opening themselves completely to another without shame or any physical defenses.

The practical reason behind a bent knee proposal is that it puts the engagement ring in an elevated position between the couple, letting the light hit it clearly without being blocked by both individuals. This highlights the glitter of the ring as well as emphasizing the strength of the commitment.

According to a study done by The Knot and Men's Health, 76 percent of men believe they should go down on a bent knee to propose. Many women find it appealing for a man to propose on one knee. The message behind the gesture can be that the man is offering himself wholeheartedly to the woman, without reservations, elevating her to an exalted position in their relationship, and offering her the choice to determine the course of their relationship.

For some couples, the woman may be the one to propose, and it is just as appropriate for her to bend her knee to the prospective groom, though such a gesture may make many men uncomfortable.

How to Carry Out the Proposal

The classic bent knee proposal is frequently carried out in a romantic location such as:

The ring can be placed in a velvet box elevated to the man's chest or eye level between the couple. While waiting for the perfect moment, keep the ring in your pocket but be sure that the bulge is not suspicious or noticeable if the proposal is meant as a surprise.

The duration of the proposal is another concern: some men choose to express their intentions with a small speech or poem, and if the entire discourse is relayed while on bended knee it can become tedious and drawn-out, particularly if the woman's attention is diverted by the ring.

On the other hand, a quick question while dropping to one knee may be too brief and catch the woman unnecessarily off-guard, though that type of spontaneous gesture can be just as romantic. 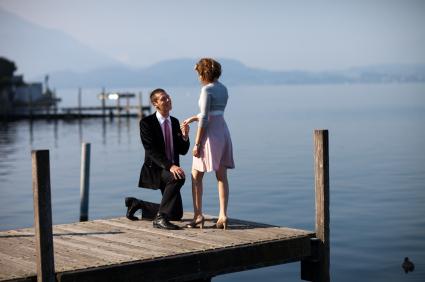 Deciding If It's Right for You

For some couples, the idea of a traditional marriage proposal on bended knee is predictable and undesirable. In that case, more creative options are available, and even if the classic pose of honor and respect is lacking, a thoughtful and romantic proposal will convey those same feelings while keeping both feet flat on the ground and both knees straight.

Whether you choose to propose on bended knee or in a more creative, unique fashion, the key is that the traditional symbolism and connotations remain the same. Any proposal should convey respect, honor, and commitment to one another. When planning a proposal, make sure that it is something you feel comfortable with and your soon-to-be bride will as well.