When couples want marriage proposals that are unique and personalized, marriage proposal etiquette can inadvertently be overlooked. It is important to remember courtesy and convention when asking for a partner's hand in marriage, and following appropriate etiquette guidelines can ensure the proposal is both memorable and suitable.

Why Etiquette is Important

Etiquette is not just a set of antiquated rules - it is a guideline for socially and personally acceptable behavior in different situations. A marriage proposal may seem to include just the happy couple, but many people will be affected by it, including the couple's parents, family members, and friends. Improper etiquette could lead to misjudged feelings, estranged relationships, and poor assumptions that can jeopardize a couple's future happiness. By following appropriate marriage proposal etiquette, the couple can enter this new stage of their relationship without causing problems between themselves and the rest of their family members and friends who will play a role in their lifelong partnership.

Three aspects of the marriage proposal often lead to etiquette concerns: asking the parents' permission, performing the actual proposal, and providing an answer to this all important question.

Historically, when brides lived with their parents until marriage and betrothals were social bargaining chips, it was required for the gentlemen to ask the bride-to-be's parents for permission to wed their daughter. Today, it is still considered courteous for a young man to ask for her parents' blessing before the proposal, particularly if she is still living at home or has strong family connections. Older couples who live on their own (either separately or together) may choose to forgo this tradition in favor of asking for their parents' blessing after the proposal.

It may seem old-fashioned to ask for a parent's permission to marry, but there are emotional benefits to doing so. If the proposal is a surprise to the family or if they may question whether or not the couple is the right age to get engaged, asking for permission or blessings first shows respect and deference to the parents' wishes. This can also help parents feel involved in the couple's relationship and will encourage them to be supportive of the couple's plan to marry.

The most important aspect of etiquette about the type of proposal is to be aware of the wishes of the individual being proposed to. An elaborate, public proposal may seem pressured, particularly in front of family and friends. Similarly, a quick surprise proposal may seem inadequate and rushed. Key questions to ask when planning an acceptable proposal include:

When deciding what to say to a marriage proposal, proper etiquette should be considered. The main focus of both the question and answer should be on the love and commitment of the relationship, not on material matters such as the size of the diamond or the engagement ring cost. While a bride-to-be may ask about these things later, her response to the immediate question should be either yes or no as her heart dictates. Furthermore, conditions should never be put on an answer - if the relationship is not ready for a complete answer, then those conditions should be satisfied before the proposal. This is why many couples choose to go to counseling and discuss many different questions to ask before getting engaged so they can work out any issues before a yes or no is required.At the same time, the individual asking the questions needs to respect the given answer, even if it is not the one they had anticipated or hoped for. It can be hard to accept a negative response, but doing so will allow the couple time to improve their relationship or move on with their lives gracefully and with fewer hard feelings.

Other proposal etiquette guidelines include: 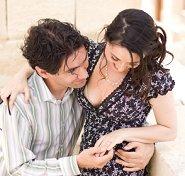 Have a happy yes.

Marriage proposals can be creative, romantic, and memorable, and following suitable marriage proposal etiquette will help them be acceptable to everyone without causing hurt feelings or misunderstandings that could damage the relationship and jeopardize the couple's happily ever after.