Promise rings are a romantic way to express love and commitment. The rings make special gifts for a couple just beginning an exclusive relationship or a married couple sharing an anniversary.

Poesy rings feature an engraving of a poem or short statement of love and loyalty. The words are printed inside the ring so that it is worn against the skin. The idea is that when words of love touch the skin, they have power. The rings have origins in ancient Egypt but were most popular in Europe during the middle ages. Poesy rings or engraved promise rings are traditionally exchanged between men and women as promise rings, engagement rings, and wedding bands. Poesy rings are traditionally metal bands engraved with words on the inside and a decorative design on the outside. Many of the traditional rings come from all over the world and have an interesting history. The rings are available as replicas of historic rings and modern artistic versions. Poesy rings come in the following styles: 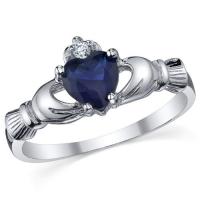 Claddagh rings are traditional Irish rings that symbolize love, loyalty, and friendship. The heart symbolizes love, the hands stands for friendship, and the crown represents loyalty. The rings are exchanged between sweethearts, friends, and family. Many people also use the ring as an engagement ring or wedding band.The ring was created over 300 years ago by an Irishman named Richard Joyce from the fishing village of claddagh in Galway, Ireland. Joyce made the ring for his sweetheart when they were separated after he was captured by Algerian pirates and apprenticed to a Moorish goldsmith. Years later when Joyce returned as a free man and a goldsmith, he used the ring as a wedding band for his sweetheart who had loyally waited for his return.

When a claddagh ring is used as a promise ring, it should be placed on the ring finger of the left hand with the tip of the heart pointing inward or toward the wearer's heart.

Christian promise rings will have a special meaning to spiritual couples. Ring designs include:

Where to Buy Promise Rings

With all the varieties of promise rings available, any couple can find something special. .