An east west marquise setting can be a distinctive and elegant choice for an engagement ring, wedding band, or right hand diamond ring. This type of unusual setting is not right for everyone, however, and couples should carefully consider whether it is the best choice for their jewelry.

Most elongated gems, including ovals, emerald cuts, and the tapered marquise stones are set in a north south configuration where the longest part of the stone stretches down the finger, perpendicular to the ring band. An east west setting, however, places the gem across the finger, lengthwise along the ring band. This can be a more practical setting because the extended parts of the gem are less likely to be caught on different objects, and an east west setting can be very complimentary to thicker fingers that might overwhelm a slim stone set in the traditional north south arrangement.

East west or horizontal settings also have a classic vintage appeal because they were most popular during eras when fewer diamond accents were used and the lengthwise setting could enhance the illusion of a more elaborate ring. Today's settings come in a variety of styles, but they are still unusual enough to be distinctive and eye-catching. 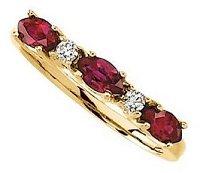 There are several types of popular designs for east west marquise rings. Options include:

East west ring settings can be difficult to find. After an initial surge of popularity following Catherine Zeta-Jones' engagement to Michael Douglass with a ten carat east west marquise ring (celebrity engagement rings often inspire popular trends), the difficulties of the east west setting made it less suitable for most mainstream jewelers. Couples interested in this unique engagement ring design may need to investigate a custom engagement ring, specialty jeweler, or antique jewelry dealer to find the right east west setting for them.

The reason why most marquise shaped diamonds are set perpendicular to the band is because that configuration makes the gem appear larger and it has a delicate, slimming effect on the finger. An east west setting may appear clunkier, and a small gem could blend into the band too much. While an east west setting can keep the diamond from snaring on objects, if the stone is too long it will protrude over the curve of the ring seem ungainly. If the ring is not the right ring size, the gem may rotate around the finger and could cause pain where the edges of the stone press on adjacent fingers. 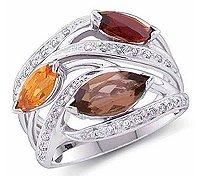 Couples who like unique engagement rings but aren't satisfied with a straight east west marquise setting can try alternative arrangements for this popular diamond shape. Marquise gems are often set at an angle to present a diagonal line, and several gems can be combined in this way to create either a parallel pattern or a herringbone effect. Marquise cut gems are also frequently used to simulate petals or leaves in flower engagement rings because of their beautiful symmetry.

An east west marquise setting ring is distinctive and unusual with a touch of vintage flair. While this type of ring design is not suitable for everyone, it can be a lovely choice for any woman who can wear it well.