Whether you are about to buy a diamond or just researching a term paper you may be interested in diamond facts and information.

What is a Diamond Made Of?

All natural diamonds are made of the same material as the charcoal you burn on the grill or the graphite in the pencil you sketch with. Carbon atoms are bonded together in groups of four in a pyramid shape called a tetrahedron. Each link is equal to every other link in size. This formation of the atoms gives the diamond its hard structure. Diamonds are the hardest naturally occurring substance known to man.

Some of the most interesting diamond facts involve the importance of the diamond throughout history. It has played an important role in religion, economy, art, and culture since the first diamonds were gathered and polished.

Diamonds have been valued as a gemstone for thousands of years. Although they were mentioned in the Bible, in Exodus, some scientists believe that other minerals may have been called diamonds as well. Diamonds were originally not mined but found along riverbanks. These early diamonds were reserved for kings and priests. Kings would stud leather breastplates with rows of diamonds to keep them safe on the battlefield.

The diamond engagement ring got its start when the Archduke Maximilian of Austria gave a diamond ring to his intended, Mary of Burgundy. More than likely the diamond for that ring came from a mine in India.

A farmer visiting a neighbor noticed the neighbor's son playing with a beautiful pebble. He admired it and it was given to him by the boy's mother, who stated that there were plenty more around the farm. Later, the pebble was identified as a 21 carat diamond, which was named the Eureka Diamond. This find sparked a diamond rush in 1870.

De Beers founded De Beers Mining Company during the height of the rush in 1880. De Beers currently control the export about 90 percent of the diamonds from South Africa. The company employs an estimated 20,000 people on five continents in different phases of the diamond production process.

The rich deposits in South Africa made diamonds available to the general public for the first time in history.

A diamond fact that most people do not know is that a diamond in the purest state is colorless. Most diamonds, however, have at least a slight color to them. Each diamond color is created because of a different situation in their formation. Some of these are: 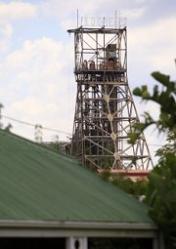 There are many other facts about diamonds that cannot be categorized easily but are still interesting.

Throughout history the diamond has been a symbol of strength and love, associated with magical powers and some are even believed to carry a curse. Entire books have been filled with diamond lore and diamond facts to satisfy the curiosity aroused by these beautiful gems.