The Courtship of William and Kate

William and Kate met when they were both studying art history at University of St. Andrews in Scotland. They first became friends and then starting dating. Yet unlike other college sweethearts, he is the second in line to the British throne and she is the daughter of upper middle class entrepreneurs. This fact put the courtship in the public eye because royal watchers around the world were fascinated by the fairy tale quality of a prince picking a regular girl.

After eight years of dating, William proposed to Kate. In an exclusive interview with Tom Bradby of ITV New, they made it clear that the eight years of courtship gave them time to come together as mature adults who love each other, share a deep friendship and also understand their public roles as married royals.

While on vacation in Kenya, William surprised Kate by proposing with his mother's ring. The couple has kept the exact details of William's proposal private but both say it was romantic in the Tom Bradby interview. The interview also revealed that William got Kate's father's blessing before proposing to her. They were quietly engaged for a month before making a public engagement announcement to the media on November 16, 2010. They plan to marry in 2011.

Proposing with Princess Diana's ring was very meaningful to her son, William, and his intended. During the Tom Bradby interview, he said, "It's my mother's engagement ring, so of course it's very special to me, and Kate's now very special to me, so it was only right to put the two together." He also said that "giving her (Kate) my mother's ring means she (Diana) won't miss out on the excitement."

Princess Diana selected the ring that her son's future wife now wears for her own engagement in 1981. Prince Charles proposed to Lady Diana without an engagement ring. Soon after the engagement, Charles presented Diana with a tray of engagement rings designed by royal family's jeweler, Garrard Jewellers, for her engagement ring selection. She chose a stunning sapphire and diamond ring.

Kate Middleton's engagement ring is an oval 18 carat blue sapphire encircled by 14 brilliant-cut diamonds on a cluster setting in an 18K white gold band. The 1981 jewelry exchange rates estimated the elegant ring was worth 28,000 pounds (equivalent to $65,000) when Princess Diana selected it. 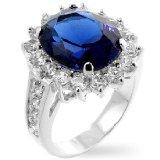 Elegant Royal Ring Has Many Replicas

Princess Diana's popularity and the beauty of the elegant sapphire and diamond combination led to many fashion and fine jewelry replica rings becoming available to the public at various price ranges. These replicas are still around today and more will likely become more available as the 2011 royal wedding approaches. Royal watchers can purchase replica rings as souvenirs and tributes to Diana's son and his bride.